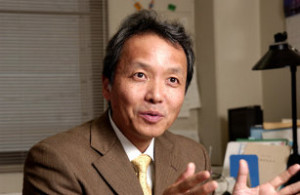 Minoru Asada received his B.E. (1977), M.E. (1979), and Ph.D. (1982) in Control Engineering from Osaka University, Osaka, Japan. He became a full Professor of Mechanical Engineering for Computer-Controlled Machinery at Osaka University in 1995. Since April 1997, he has been a Professor at the Department of Adaptive Machine Systems at Osaka University (Suita, Japan). Since 2013, he has been the director of the division of cognitive neuroscience robotics, the Institute for Academic Initiatives (IAI), Osaka University. He was the Research Director of the JST (Japan Science and Technology Agency) ERATO (Exploratory Research for Advanced Technology) ASADA Synergistic Intelligence Project during 2005 and 2012. In 2012, the Japan Society for Promotion of Science (JSPS) named him to serve as the Research Leader for the Specially Promoted Research Project (Tokusui) on Constructive Developmental Science Based on Understanding the Process From Neuro-Dynamics to Social Interaction.

In 1997, his team was the inaugural champion (shared with USC), in the middle- sized league of the first RoboCup competition held in conjunction with IJCAI-97 (Nagoya, Japan). His team called JoiTech in the humanoid adult size league in 2013 got the championship and the best humanoid award in RoboCup 2013 (Eindhoven, Netherland). In 2001, he received a Commendation by the Minister of Education, Culture, Sports, Science and Technology, Japan Government as Persons of Distinguished Services to Enlighten People on Science and Technology. In 2006, Professor Asada received the NISTEP Award from the National Institute of Science and Technology Policy. In 2005, Professor Asada was elected Fellow of the IEEE for Contributions to Robot Learning and Applications. In 2007, Professor Asada was awarded The Okawa Publications Prize (The Okawa Foundation) and, in 2008, he received The Good Designs Award (for VoCal – Vivid Oral Conversation through Acquiring Language (Japan Industrial Design Promotion Organization) .

In addition to the above, there are many invited talks in Japan.

Some conferences and Workshops are missing. Session chairs in many international conferences.

In addition to the English papers, there are a large number of Japanese
journal papers.

In addition to the above papers, there are enormous number of Japanese
papers.

In addition to the above, there are a large number of of Japanese Book
chapters and surveys.